This year was marked tests. Throughout the year we honestly practiced and sometimes we made a small detour to show where we were very successful. We succeeded with Cyra fold versatile test and Met mastered his first two days of tests and gave him a really hard time. I hope that next year we will again move more in an examination field and occasionally like to jump somewhere in the exhibition.

I would like to wish you all a Merry Christmas, a quiet start to the year and much success in your life and even the fourlegss friends.

At the end of the month November (11.26), I decided to take Met the in pheasantery to Baron Parish. It was the last pheasant hunt this year. I was a bit concerned, but the Met was great. His composure when shooting me incredibly surprised. The whole time he went on leave and was sent to a command. Because it was the first time the pheasant and he did a little problem life pheasant. At the beginning, I had it a few times to confirm that "it" I really want to bring. With a greater number are treated Met more and more improved. The best of his work was at a last place which brought me great live-shot pheasant. See photo below this text. On Discards were also some orebic. More photos on Flickr by clicking on the photo of Met

The rest of the month we practiced with the dummy in the woods. Where do we go regularly. We train retrieval, traces and many other things. Weekend before the holidays with us snows and me it was impossible. I had to take pictures of the boys.

At the end of last month (29. 10.) we have to Cyra attended our first hunt pheasant in Konopiště. It was a great experience for both. Cyro first two methods for treating a little worked like crazy, but then drove to the local customs and worked in peace and with absolute precision. At the end of the discards were 1,398 units, of which hens and cocks wild pheasant, pheasant and some royal Orebic.

The next day (30. 10.) I went to Prague again, but this time with our Met at Prague Expo Dog. He joined the working class already fierce competition for adult, experienced dogs. Judge De Cuyper Joys assessed very carefully and correctly. Let us get on, elapse wheel. Then everyone took individually and wrote the report. He Met like very much and so his class in competition of 4 dogs won! :-)

At the end was followed by a running CACIB, which unfortunately we lost but belonged to us for second place (RCACIB).

A fortnight (11. 11.) We went back to Cyro at Konopiště, where we already knew how it would work. I dared to have Cyra 90% of the time on leave at his feet. It is very quiet and goes on command only when I say. Works systematically and great. The morning we came out beautiful weather, but after lunch was a bit overcast and was thus excludes the beautiful 726 pieces. I managed to take a picture of something. Slightly below the text and the rest here on Flickr.

And immediately the next day (12. 11.) We Cyro went with a smaller association to hunt in Josefov. It was the cocks pheasant, duck and vermin. Cyro worked great. The greatest joy, however, I did a piece that vyhlead alive. The hunter shot a pheasant Cyro tracked down and brought beautifully. Several rookies brought me in a net and ducks. He participated in the expulsion of foxes deadwood. I should have made him happy, and especially when he praised hunters :-) Below the text and a few photos HERE also rest on Flickr.

At the beginning of the month I confided the boys to care for a haircut, our friend Eva (EVIGOLD.CZ). Shearing was fast and we were able to go from already arranged a photo shoot. We first set out to make pictures of the park in Pardubice, where he took pictures of each other's position, portraits was attempted and common photos. Subsequent continuation of the forest where it had enjoyed Boys. We tried different combinations: the crawling behind a tree together in the finale there was also fetch a pheasant :-) Below the show portraits of our guys adding common photos of Elizabeth Cyr. I would like to thank Eva Šípová and Lukáš Beránek for amazing photos.

The third weekend of the month, I went on a long weekend at Lestina training, which was organized by Eva Píchová (Training Retrievers Praha). The boys were placed in groups to Petra Hrabětová and power they could. On Saturday we spent the day at the game and nobody could think of no crap. Morning was held marking where Met bit forgotten, but subsequent supervision in a square in the woods was great. Cyro expertly passed the square and goes brought both pieces. Met followed that place prolítal least five times and subsequently brought pheasants, but it did not bother my temperament more and with more experience he will go for sure. Siding with rabbit guys did absolutely exemplary. No hesitation was not in place. Last fetch in the tall grass, and we could go to camp. I indulged in a little rest and went back into the forest. This time the pond. The first duck from deep water was specific in a very high and steep bank. I was afraid that the Met dropped it down a duck. Beyond my expectations both her brought beautifully to the top. Subsequent marking with a dummy and two ducks in deep water. Cyro had it harder, he could not see where it had fallen, but they did not hesitate, and both brought. Met are a bit easier for a single second and saw he was on the mirror. Even he had a problem and we finished a lovely Saturday. I had them very happy. They worked wonderfully. On Sunday morning was a dog contest Kolodější guys and not only they, where he competed in four disciplines after teams. Competition We came with little hesitation.

Below I attach to sample photos of our boys.

On Saturday 30. 7. we went with Met the direction Choustníkovo Hradiště. Met a lot of famous derby and enrolled 23 dogs and Goldens prevailed. It started to draw a veterinary inspection. I pulled out my number 2, which ranked us on Saturday at the Autumn Tests and the first group. I arrived at the place where it was everything. It was nice that we do not hit anywhere. We started trace and retrieve game birds, where Met in great time limit brought pheasant and got 4. Searching for, retrieving and guiding - Free was in a similar vein. Then came a pause, waiting for the rest of the disciplines. Arbitration ordered and we went to deep water. Met beautifully shot while sitting and ran up to my command. Unfortunately she stopped him get in the water, which was down the stairs and then probably nothing ... He did not know where and I had to give a command. Thus, we got 'em first mood was gone and we waited for the last siding. Fortunately, he showed them a sample work and reputation have improved by referees. Met this autumn has completed his second test with 220 points, unfortunately, due to the limit mark in the third price.

Cheek to Cheek Jack the Bear - Autumn trial 220b., III. price (the limit mark of ducks from deep water)

On Sunday we waited for our first tests of the water trial. Began to discipline the behavior at the post. Meta I left off at and above my expectations a full 10 minutes and always beautifully lay zpozornil when she arrived late. So we got a beautiful stamp fourth followed by guidance on 2 ducks in deep water. Rozhdčím I was told to go to a duck that fell like a second shot. Met again went on command and stopped. Today I left him a little longer. He began to run around the bank, then it to me and even announced. That, however, I issued an order and then delivered to the surface and brought the duck without a problem. Followed by a second, where I was a bit tensed when předsednul next to me and I had to make a half-step and take a piece. The work was finally awarded level 3. Other disciplines such as retrieving and guiding mark we came in third on the second day Metovi tiredness, and we are still waiting for the last two disciplines. Short pause for a snack, and off we went. It started raining, but work dohledávky duck tossed it in the reeds Metovi not detract showed a beautiful job with the mark of the fourth And the best for last. Search reeds proved popular Metova diciplína. It was as if alive and reed prolítal beautifully and I must say it was very thick (the day before on him two dogs get 0). Referee praised his work, and we got an amazing 4. This Met dokočil their first trials of water working retrievers I. price.

I got him very happy that in less than two years mastered for the first time two days test.

All beautifuls photos from derby you can find HERE on Flickr.

Approached the start of the holidays with me and eased somewhat in school. So we have to Cyro began preparing for our first higher exams that I have signed up in advance. We repeated traced and after half a year we have been through three color and off we went. I believed that Cyro is a trouper and everything it has in itself.

With Met we logged on DUO CACIB Brno on 6. 2. 2015. Only on Saturday, when qualifying for Crufts. :-) So I wonder what the final number of entries. 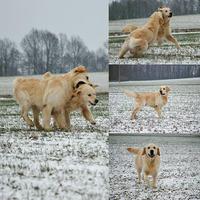 Yesterday we went to the field with my camera and I took a few pictures. (After clicking on the picture opens Flickr)